You need visit the Ski Utah website and read Tele Tony’s “Locals Knowledge” articles. This one on Deer Valley goes beyond the corduroy grooming and superb dining. According to Tony, whatever type of skier you are, there’s a side to Deer Valley for you.
For the entire article and to learn more, click here.

As the ski season gets underway, new properties are coming on the market. Investment in real estate is often one of life’s largest, financially. Investment in family and lifestyle is worth every penny. Living in Park City and the surrounding areas amongst the splendor of a mountain environment will be your daily dividend. That’s priceless.

View the newest listings at https://parkcityandbeyond.com/new-property-listings/

Modern luxury on the mountain.

Famous for its pristine snow, summer wildflowers, and charming historic downtown, Park City, Utah is a town of alpine dreams. It’s here you’ll discover a new Pendry resort rising at the base of Park City Mountain Resort in the heart of the revitalized Canyons Village.

Opening winter of 2021, Pendry Park City will be the ideal base for outdoor adventures in every season. Our prime ski-in/ski-out location offers 7,300 acres of exceptional terrain paired with all of the services of a luxury resort, including ski valet, Spa Pendry, fine dining and a rooftop bar and pool. During the warmer months, hiking, mountain biking, and outdoor concerts are equally enticing endeavors.

A modernist take on a traditional alpine lodge, the resort will feature 150 guestrooms and suites, along with fully serviced Pendry Residences Park City ranging in size from studios to four-bedroom homes. Pendry Park City beckons with views of the Wasatch Range, clean design and the coziest of beds. A mere 35-minute drive from Salt Lake City International Airport, this stunning mountain getaway is easily accessible from either coast.

According to an article by Jay Hamburger in the Park Record on November 7, 2018, the group readying for the possibility of Salt Lake City and the wider Winter Olympic region mounting a bid for another games have submitted materials to the United States Olympic Committee outlining early concepts illustrating how a future Olympics could be staged.

“It’s finally go time. It’s time for us to make the case that Utah is ready to host a future Winter Olympic games,” said Colin Hilton, a member of the Salt Lake Executive Committee for the Games and the president and CEO of the Utah Olympic Legacy Foundation

Our take on it is we are fulfilling the role of legacy like no other place,” Hilton said.

The foundation Hilton leads oversees the Utah Olympic Park in the Snyderville Basin, the Utah Olympic Oval in Kearns and the Soldier Hollow Nordic Center in Wasatch County. Each of the locations was an Olympic venue in 2002.

The Park City area will play a critical role in the materials that are submitted to the United States Olympic Committee. The Park City area hosted upward of half of the events during the games in 2002 and is expected to have a similar role in the blueprints for a future Olympics.on Wednesday

Park City Mountain Resort, Deer Valley Resort and the Utah Olympic Park are seen as important competition venues in a games map. The Utah Olympic Park would host the sliding sports and ski jumping, the same events held there in 2002. The February report provided a concept map of the venues that also called for Park City Mountain Resort to host snowboarding and freestyle skiing events and Deer Valley Resort to host freestyle skiing and alpine skiing events.

UPDATE: According to an article in The Salt Lake Tribune by Christopher Kamrani, on Wednesday five USOC members spent twelve hours in Utah.  Utah officials showed off the 2002 Olympic venues still as active as ever, still part of respective World Cup and World Championship calendars each winter. The group stopped in Park City to check out the Utah Olympic Park, home to the ski jumps and bobsled, skeleton and luge track. One of the stops in the afternoon included Rice-Eccles Stadium, where just hours earlier, the University of Utah held a news conference to announce  progress toward an $80 million bond for expansion of the stadium that hosted the 2002 Opening and Closing ceremonies.

A report from Utah officials earlier this year stated that another Olympics here would cost around $1.29 billion — less than the 2002 Olympics. Gov. Gary Herbert said Wednesday that the Games would involve public as well as private funding. Recent polls taken statewide had projections that as high as 89 percent of Utahns would support another Olympics in Utah.

Released October 31st, 2018 by The Park City Board of REALTORS®.

PARK CITY, UTAH — At the end of the third quarter of 2018, housing statistics revealed slowing demand and an increase in median sales price. Year-over-year, the number of single-family home sales in the Greater Park City Area decreased by 4.5%, while the condominium sector was down 9% compared to last year’s numbers, as reported by the Park City Board of REALTORS®.

Single-Family Home Sales
The number of single-family home sales within the City Limits was relatively flat (off less than 2%) and the median price of $1.95 M remained the same to 12 months ago. By neighborhood, Old Town had the highest number of sales – up 10%, while there were 30% fewer sales in Park Meadows.

“New growth continues to move eastward and southward to areas that still have developable land. The dramatic rise in construction costs is fueling the median sales price increases seen in the outlying areas, but active listings are still well below in-town Park City prices. The introduction of new developments will enhance this trend for the foreseeable future. As areas develop, much of what we now consider as “outlying areas” will feel like another extension of town,” said Park City Board of REALTORS® President, Todd Anderson.

Condominium & Townhome Sales
Year over year, the number of condo sales within the City Limits was down 5% but up 8% in median price to
$820,000. The Snyderville Basin reported essentially the same number of sales as last year with 291 units sold and saw a median price increase to $525,000.

Anderson commented, “The difference between these two larger areas may be attributed to the completion of localized developments versus the reserved or pending status of to-be-built product. Expect to see continued large fluctuations as projects are completed. Canyons Village and Deer Mountain both have the potential for enough new construction to influence future statistics in our market area.”

The number of closed sales dropped 25% in the Jordanelle, possibly due to lack of inventory, as new construction projects in this area have been completed and sold leading to fewer units available, but there was an 18% increase in median price.

Conclusion
Historically, July and August are the months with the highest level of inventory for homes and condos in the Wasatch Back, but the current trend of sales volume is changing and we are seeing a continued upward tick of inventory which has not been seen for some time. This trend may signal a coming price change, although in some of the most desirable neighborhoods, a shortfall of for-sale properties will be scarce and the median prices will remain strong. 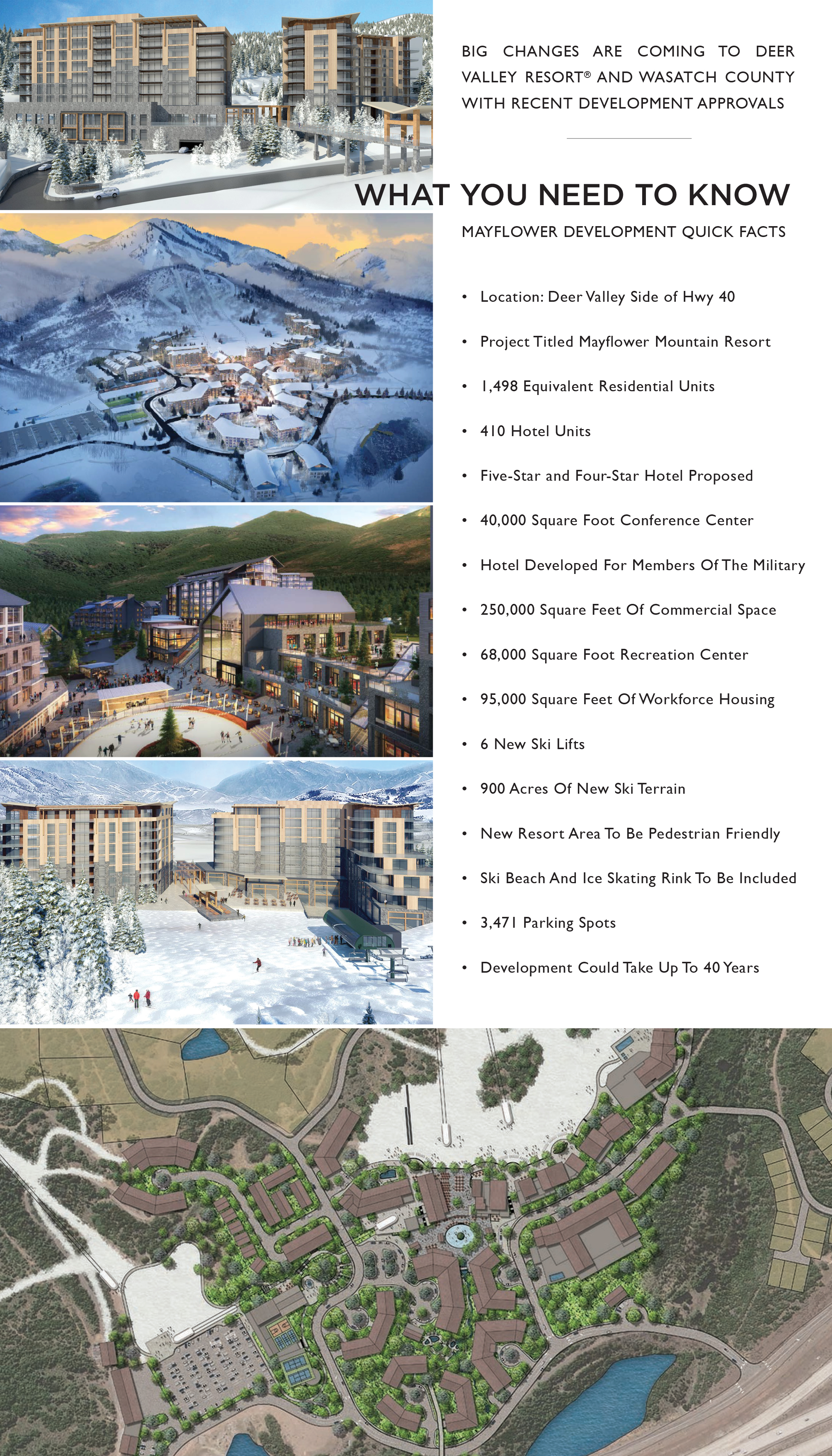 “We love the competitive nature of Park City locals, and we are determined to be back on top with a new shot ski record this year,” said Park City Sunrise Rotary Club member Connie Nelson. “And what better way to go bottoms up than with High West whiskey in our glasses?”

High West Distillery, the event’s presenting sponsor for the first time this year, will be topping off glasses with their own Rendezvous Rye.

A $25 ticket includes a spot on the shot, one souvenir shot glass and a token to enjoy a High West specialty drink at one of several after-party locations. High West is the official after-party site including Wasatch Brew Pub, OP Rockwell, O’Shucks and No Name Saloon, will also be celebrating. Please note tickets are non-refundable the event will take place rain or shine, guests must be 21+ to attend and have a valid I.D.

Join me at the Harvest Festival at High Star Ranch tomorrow from Noon – 5pm! The festival will feature local food and drink, activities for kids, wagon rides, live music, local crafts, and more. The State Road Tavern and restaurant opens at 11am.

The Park Silly Season Finale is this weekend, Sunday September 23rd. Also featured will be the Pet Fest Adoption. Click here to read more about the planned activities!